One of the coping mechanisms I developed thanks to my ADHD and chronic depression was to always stay productive. Growing up, I took on the identity of “a jack of all trades”, and every hobby I came across was so intensely interesting to me. At first I merely thought that these were gifts or maybe even a calling. I pursued interests while conforming it to my identity. I went from model trains to computer programming. Then to art. Then guitar, then piano and bass. Never getting too deeply invested in one thing, as I slowly became a custom to my tendency to adapt and change hobbies. In college I changed my degree course on a complete whim. I asked the drummer in the band I was in what his major was because o was tiered of taking boring math classes and he said his major requires a simple single math credit. He said he was studying Graphic Design. I knew nothing about it or what careers might be available, I simply changed majors and started taking classes.

It’s only much later in life that I recognize and understand these patterns of dopamine chasing experiences. I will usually lose interest in something the moment I start to cross the line between novice and amateur. The dopamine rewards become more sparce as you enter the phases between amateur and professional or mastery of a skill. As more effort is required with less access to reward, my brain begins to crave it’s next adventure. It turns out my career path was a lucky one. Technology along with design and communication is a constantly changing landscape. Almost once a month I have to learn something new. Some new software package or technology API. If a new challenge isn’t thrust upon me, I will inevitably find one for myself. I probably owe a lot of who I am to my brains pursuit of challenge and reward. Lately I have been wondering if there is a better way though.

When people as, “how are you?”, I used to be quick to answer “fine”, even when I was far from being okay. I now try to be more honest with people but I find myself answering “keeping busy.” And I do keep busy. Outside of work, I start a new hobby or craft project almost every week. Sometimes I look around and realize I have to many things going on. I have over committed and my craft area has been consumed by chaos. I have solved this problem by expanding. Like an exploding star consuming the planets around it, my interests have begun finding their way to different parts of the house. I keep so busy that I often dream of adding days to the week or hours to the day so I could get to everything that I am attempting to balance in my life. I do more and more, but as I chase away the sadness by running on this treadmill of activity, the sadness is still right behind me. I’m not afraid of it any more. I have become comfortable with depression and it’s effects and I no longer let it guide my choices. But I do worry about burning out. Crashing. Falling off the treadmill and crashing into a state of depression.

Sometimes people admire this aspect of my life. How much I do and try. But lately I have been hesitant to encourage people to follow me down this path. I don’t know if I am doing myself any favors. Perhaps I am just developing so much tolerance for experiences that produce dopamine that I am setting myself up for that massive crash. Lately I have had chest pains. I feel fine most days, but I have palpitations, especially at night, and it leaves me feeling like I have had a panic attack. Which I haven’t had in a long time, but it leaves me feeling drained and light headed. But the exhaustion isn’t merely physical. It’s mental and emotional. I think my deepest fear right now is reaching my limit. Just falling apart or dying and knowing how unfinished so many things are. But finished or not, I did my best to make do. 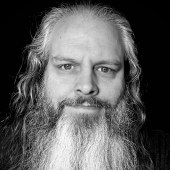 NXiL is just some guy who is attempting to understand one of the most complex issues of our time. Myself.